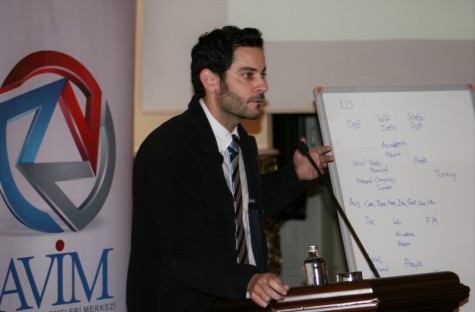 Parliamentary laws are not empowered to determine which acts constitute the crime that is known as genocide. The U.N. Convention on the Prevention and Punishment of the Crime of Genocide (CPPCG) declares in Article 6 that the charge of genocide has legal effect only when tried by a competent tribunal. French politicians have ignored this clear language.

In January 2001, France's parliament passed a law that accepts the applicability of genocide regarding the Armenian suffering, even though actual evidence had never been brought before an authorized court for review in the context of this genocide claim. This act of lawmaking created a false perception that the term genocide can be legally assigned to the events of 1915 by the votes of local politicians.

Recently, the attempt to confuse the legal standing of the Holocaust with the political standing of the Armenian allegation has prompted a reiteration of the difference between courts of law and houses of representatives. Now that France's Constitutional Court has reaffirmed that proper history is decided by proof and not by popular demand, the matter is seen as a triumph for French democracy and an excellent example of how the separation of powers is supposed to function.

Nevertheless, the sum of this separation of powers is that the debate has provided yet another major platform on which the term genocide is associated with Armenian victimhood and Turkish perpetration. Greater attention to the consequences in terms of public knowledge would show that in this instance the separation of powers meant a unified soft-power effect on the information that is consumed by the public.

Soft power aims at minds and is marked by the ability to generate particular information, attract people to this information and then have them absorb it as part of what they know - or think that they know - about the world. In turn, this "knowledge" affects their attitude and leads them to do things in accordance with the interests of great power. For this process to be successful, the public must be distracted from its guarded position against information control. One method through which this is accomplished involves setting up a debate. The public is focused on having to decide between the marked opinions, and as a result it neglects to question the significant details that are part of the seemingly balanced report. The report is made to appear balanced because it is placed between extreme sides, and then the report - while establishing an agenda itself - is taken for granted and absorbed as basic knowledge.

For instance, in 2012 when France's Constitutional Council dismissed a draft law that would have criminalized those who deny genocide, it served as an occasion to attract people into absorbing more information that associates the term genocide with Armenian suffering and Turkish denial. Powerful sources of information such as the BBC, CNN, Reuters and The New York Times published articles in which the existence of the French bill was utilized to present the words "Armenian" and "genocide" together yet again. This information is then circulated around the world by way of syndication. The news item also offered an opportunity to add, as The New York Times did on Feb. 28, 2012, a repetition of what has attained the status of a mantra: "Historians widely believe that about 1.5 million Armenians were systematically killed by Ottoman Turkish troops." Genocide scholars who are paid to selectively label events as genocide and rummage through wartime propaganda to criminalize Turks are not historians.

These efforts to instill a popular language that familiarizes the condemnation of the entire Turkish people come in cycles. In 2012, French Senators Herve Marseille and Valerie Boyer were the ones whose statements denied that the Holocaust has a unique status in French law. In the fresh version of this French debate, it was a convicted Holocaust denier, Vincent Reynouard, who claimed that the non-legal standing of the genocide allegation in the Armenian context warranted a legal challenge against the validity of criminalizing Holocaust denial. Aside from revealing that certain French politicians and neo-Nazis might share the same argument, this recurrence means that as weak as their argument is, its repetition thickens the genocide discourse by placing one layer of controlled information on top of another.

The uniqueness of Holocaust denial is seen as fundamental when forced into comparison with the Armenian-related rhetoric about denial. The Holocaust is a name of an event, but genocide is a legal characterization. To say that the Holocaust did not happen as told is not the same as saying that what happened to Armenians was not genocide. As the Gayssot Act in France clarifies beyond any doubt, the denial that crimes against humanity were committed by Nazi leaders is itself a crime. It is illegal to deny the Holocaust, not simply because it offends Jews but because it defies the legal competence of the International Military Tribunal at Nuremberg that convicted the Nazi leaders. No competent tribunal has ever ruled that the crime of genocide was committed against Armenians. Therefore, saying that Ottoman Armenians were not victims of genocide is not the same as saying that they did not suffer, nor is it the same as repudiating the decision of a competent tribunal.

Even though this distinction is elementary, bills that carry bogus references to genocide keep getting drafted and, along with them, the Holocaust keeps getting dragged into conversations that question its legal protection. In Switzerland, a debate similar in essence to the one in France played out when the Swiss judicial system convicted Doğu Perinçek of rejecting the use of genocide in describing the Armenian deaths during World War I. The European Court of Human Rights (ECtHR) overturned the Swiss decision in Perinçek v. Switzerland. There had been a Swiss failure to recognize that popular notions of genocide denial cannot be related to Holocaust denial. It was shown that it is within one's freedom of speech to express disagreement with an opinion about genocide, despite the opinion's popularity in the Armenian case. Much like France's Constitutional Council, the ECtHR's Grand Chamber distinguished between the case and Holocaust denial, but not before the circus had come to Strasbourg and attracted attention through celebrity appeal. Thus, the public was opened up for more information that combines the idea of genocide with a Turkish offense against Armenians, regardless of who won that legal debate.

While the separation of powers seems to be on the Turkish side of the debate on genocide, every highly publicized debate is on the Armenian side. There is no such thing as bad publicity in the soft-power commitment to make Turkish culpability seem like a matter of fact. The genocide discourse that relies on prejudice against Turks continues to build even when an Armenian delegation loses its case in court. Even when it is clearly stated that there is no legal reason to accuse Turks of genocide, what the public remembers is that Armenians were genocide victims and Turks are genocide deniers.

As long as people around the world are taught in schools and universities to think about this period of Ottoman history in terms of genocide, and as long as it is embedded in the language used by the popular sources of information, every court decision against the Armenian claim of genocide would appear to them as if the historical truth is being negated by legal technicalities and Turkish political pressure.

U,S, Secretary of State John Kerry's latest statement about genocide illustrates how the soft-power effect is achieved even without sufficient evidence or a single visit to a court of law. Kerry carefully prefaced that the following is said in his judgment - meaning, not a court's judgment - before asserting that "DAESH is responsible for genocide." In this manner, he abided by the separation of powers and did not assume judicial authority, but significantly, his words do echo, and world public opinion is being informed and formed by this discourse that associates DAESH with the crime of genocide in accordance with American interests.

There is no way of winning in the court of public opinion when an accusation of genocide is repeatedly uttered against you by a great power. Advocacy for merely the right to reject a characterization of genocide is a recipe for perpetuating what is seen as genocide denial.

The way to refute this discourse and be liberated from its burden has to be paved with evidence and has to be led by historians toward an internationally recognized legal articulation against the misuse of the term genocide. With confidence, and in the spirit of Article 9 of the CPPCG, the dispute can be settled once and for all. It might even inspire an amendment to the CPPCG that would criminalize the systematic soft-power labeling of genocide against an entire people or government when charges against specific groups had not been tried by a competent tribunal.

* Ph.D. candidate in Political Science at the University of Utah