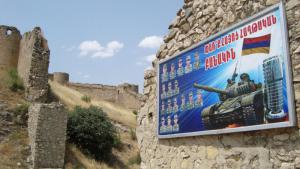 The escalation of the Nagorno-Karabakh conflict earlier this year has left Armenia with no option. The only way to resolve the conflict is to end the occupation and come to the negotiating table, argues Kamal Makili-Aliyev.

The game of chess is a very popular sport and entertainment in both Azerbaijan and Armenia. In Armenia, it is even a compulsory subject in primary and secondary schools. Yet, despite the fact that this game is so well mastered at a national level, Armenia finds itself in a very difficult position on the chessboard of regional politics in the South Caucasus, especially after the escalation in the area of Nagorno-Karabakh conflict in April 2016.

With two out of its four borders with neighbouring countries closed and with no direct railway connection with Russia – the largest country in the South Caucasus neighbourhood, Armenia is by definition in a difficult geographical position. But the two closed borders with Azerbaijan and Turkey are solely the result of Armenia’s own actions. Military aggression and the occupation of Nagorno-Karabakh and seven adjacent regions of Azerbaijan led to the closure of these borders more than 20 years ago. Despite the recognition of these territories as belonging to Azerbaijan and condemnation of the aggression by the international community, Armenia is continuing its occupation while pretending to want peaceful negotiations.

It is this kind of policy from Armenia that has meant the protracted efforts to resolve the Nagorno-Karabakh Conflict peacefully have so far failed to bear fruit. The military escalation in April 2016 served as a reminder that this conflict is a very real threat to regional and international security. It attracted a lot of media attention and generated a political momentum for the larger powers to return their attention to the issue. What is more interesting is that Armenia’s post-escalation situation can be described in chess terms as Zugzwang. This is when a chess player finds themselves in the position that will be worsened by any possible move.

The April 2016 escalation clearly revealed the military capabilities of Azerbaijan, which delivered an asymmetrical response to the artillery shelling of its civilian population that lives along the front between the Armenian and Azerbaijani armies. This was the first time that Azerbaijan used its military power in a counter-offensive with the aim of pushing back Armenian artillery positions and securing its civilian populations. That operation was successful. Azerbaijan was even able to liberate some of its internationally-recognised territory. This was not the kind of mythical “failed blitzkrieg” that some analysts tried to paint it as. Had this been the case, the operation would be directed at very different geographical positions and would not have targeted artillery positions. Rather, it would be concentrated on “drilling in” deep into the hostile territory to establish positions there.

One of the results of April 2016 escalation was the end of the myth of the ‘impregnable’ Armenian defence on the line of contact. It showed that Armenia will be unable to hold its military positions on the occupied territories should Azerbaijan choose to use Article 51 of the UN Charter and exercise its inherent right to self-defence to liberate the occupied territories using force. The moves now available to Armenia can only weaken its position. Going into the military standoff with Azerbaijan and choosing war will only lead to bloodshed that will end with Armenia’s military defeat. This would deprive the country of the scarce resources it still has. On the other hand, choosing peace and still trying to maintain control over the occupied territories of Azerbaijan through the continued pretence of peaceful negotiations will worsen Armenia’s already dreadful economic situation and may weaken its internal situation to the point of making it an altogether failed state.

It is clear that whichever move Armenia chooses, be it war or peace, its situation will only deteriorate. On the other hand, withdrawal from the occupied territories of Azerbaijan may give Armenia the chance to abandon its hopeless chess game and bring peace and economic development to the region.