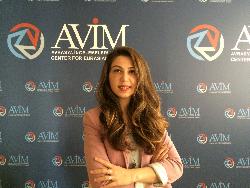 Tutku Dilaver graduated from the Department of International Relations of  Ankara University’s Faculty of Political Sciences in 2015. After her graduation, she took lectures on EU-Turkey Relations, EU Law, and EU History at Master’s level in the European Union and International Economic Relations program of Ankara University’s Avrupa Toplulukları Araştırma ve Uygulama Merkezi (ATAUM - European Communities Research and Implementation Center). In 2016, Dilaver began pursuing her Master’s degree in the Caucasus Studies Program under the Department of International Relations at Ankara Yıldırım Beyazıt University’s Institute of Social Sciences.

During her undergraduate studies, Tutku Dilaver participated in the Association Internationale des Étudiants en Sciences Économiques et Commerciales (AIESEC) student community as a volunteer. In 2016, she worked as the Project Assistant in a private company dealing with European Union projects. After her completion of a six-month trainee program in the Center for Eurasian Studies (AVIM) in August 2017, she joined AVIM as a Scholar in Residence. She has been working as an Analyst at AVİM since August 2019.